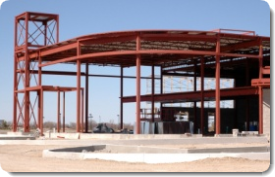 If you’ve stood in front of the Great Pyramid of Giza or seen a picture of the Colossus of Rhodes or any of the seven wonders of the ancient world, it’s indescribable the awe it elicits from viewers.

These structures served as inspirations for modern architects to build wonders of their own. Armed with sophisticated knowledge of engineering, material science, and more, unnatural designs can be conceived and implemented like never before.

We’ve compiled a list of our top 7 wonders of modern architecture in no particular order. But be warned, this list is in no way exhaustive because countless breath-taking structures exist in our world today.

Located across the gorge valley of Tarn in Southern France, Millau Viaduct is a multi-span cable-stayed bridge. Since its completion in 2004, it has remained the tallest bridge in the world with a height of 336.4 meters. Designed by engineer Michel Virlogeux and architect Norman Foster, this bridge cost about $424 million to construct, and over 3,000 workers were involved. Builders of the Millau Viaduct claim that the bridge will last for at least 120 years. Surely, this structure will provoke jealously from the ancient Roman builders, who were in no small way, masters of their craft.

Incheon airport is no ordinary airport – it’s the world’s best! This largest airport in South Korea opened in March 2001 with a construction cost of about $1.3 billion. The brainchild of Curtis W. Fentress and Terry Farrell, it is considered an architectural jewel.

The roof of the airport resembles a Korean temple, with futuristic detailing, as well as a plethora of facilities, including a golf court, spa, rooftop, meeting rooms, ballroom, casino, ice-skating rink, interior garden, and more. Little wonder Airports Council International has named the airport the best in the world for seven years in a row for its quality service.

Plam Islands consist of three artificial islands – Palm Jumeriah, Deira Island, and Palm Jebel Ali – on the coasts of Dubai, UAE. The simplistic yet appealing design of these islands was conceived by the Rule of Dubai. At the moment, only Palm Jumeirah has been completed. It hosts over 60 luxury hotels, 5,000 apartments, 4,00 residential villas, spas, movie theaters, thematic parks, malls, and more. Unsurprisingly, Palm Jumeriah also has the only 7-star hotel in the world – Burj Al Arab Hotel.

While simplicity is at the heart of iconic architectural designs, this design is in opposition to that. Yet, its icon status is unparalleled. It was designed by the Pritzker prize-winning architect Frank Gehry. Its majestic space is built from glass, limestone, and titanium that naturally aligns with the contours of the Nervion river.

The structure has received praise from countless reputable architects, like Philip Johnson, who described it as “the greatest building of our time.” Little wonder over $500 million was generated from tourism alone, three years after it was opened.

The Marina Bay Sands is an integrated resort located in Singapore. When it was opened in 2010, it was the most expensive casino property in the world, valued at S$ 8 billion. From distance, the Hotel’s towers appear straight. But upon close inspection, the columns are slanted at 26 degrees. That number ‘26’ has a cultural significance to it – it adds up to ‘8’, which is a lucky number in Chinese culture.

The architecture of the Marina Bay Sands is more than its aesthetics. The ArtScience Museum comprises 10 fingers anchored by a unique round base in the middle that illuminates the dramatically curved interior walls. The Museum’s roof channels rainwater to create a 35-meter water drop used in the building’s cooling system. The energy-efficient elevators also convert kinetic energy into electricity. The Marina Bay Sands is simply an architectural and engineering wonder!

Also known as the Leaning Tower of Abu Dhabi, this skyscraper is over 160 meters tall. While it’s nowhere near the tallest building in the world, what’s striking about it is that it was designed to incline 18 degrees west.

The Capital Gate’s slope, leaning strikingly westward, is almost five times that of the Leaning Tower of Pisa. It currently holds the Guinness World Record for the world’s furthest-leaning man-made tower. The loft houses a hotel while the other floors are home to several businesses.

Known by its nickname, ‘The Giant Egg’ because of its distinctive flattened-dome shape, NCPA is located in the center of Beijing. The building is situated in the middle of a 35,000 sq.m artificial lake, around which a green ring of 39,000 sq.m is intended to isolate the building from the noise of the city.

This awe-inspiring design was conceived by French architect, Paul Andreu. The building houses an opera house with a capacity of 2,398 seats, a concert hall with 2,019 seats, a theatre with 1,035 seats, and a smaller multi-function theatre.