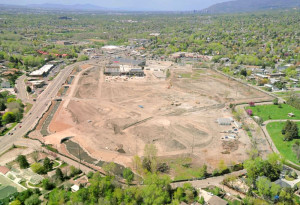 You might say we’re helping to “lay the groundwork” on a much debated, highly anticipated, and long-awaited project in the Holladay and Cottonwood Heights communities.

How? Before any plans were made for the site of the old Cottonwood Mall redevelopment, the McNeil Engineering team of civil engineers was called in to provide the expertise needed to make future site plans for a sustainable proposal.

The project has been highly anticipated because the site has been mostly unusued and left with a number of vacancies for a long while.

Neighbors of the site of the old Cottonwood Mall, which opened in 1962 and has been closed since 2009, have long waited for news of how the site would ultimately be redeveloped.

The old Cottonwood Mall was also very much on the mind of city leaders, who understood that the unused property would bring in no supporting taxes or job, and was a blight on the area as it sat undeveloped. They were also keen to see the site used in a way that would be of value to residents of the area.

Potential developers also had a stake in the project as a major financial investment and opportunity in a well-regarded neighborhood and community.

When the McNeil team was called in, the required civil engineering task was a big project — and we don’t just mean in regards to the size of the property. We were asked to provide surveying, demolition plans for the old buildings, and site utility plans and profiles.

In addition, we were asked to plan the area around the site, as well. There was a creek running through the property that would need to be relocated. That was a task in and of itself, as we found that the section of Big Cottonwood Creek on the site not only needed relocation, but also restoration to attain a more natural state.

This meant our team would need to include a hydrologic study, coordinated with federal and state agencies. Those included FEMA, the U.S. Army Corps of Engineers, Salt Lake County Flood Control, and State Division of Water Resources.

We also had to account for surrounding street plans and profiles, and additional drainage to accommodate for both natural runoff, and prepare for disaster conditions.

The impact of civil engineering on the community

Such tasks are all part and parcel of what it means to be work on a civil engineering team. The McNeil Engineering team is regularly asked to provide the expertise to engineer the built environment in ways that will solve problems.

Ultimately, the plans we provided the expertise for included for a complete grid of streets, bridges and restoration for the relocated Big Cottonwood Creek, pedestrian blocks, and an infrastructure that would support a mixed-used development of places to both live, work and shop on site.

We’re proud of the expertise we provided to bring this site into alignment with the wishes of the community, and can’t wait to see how it turns out.

In 2018, the McNeil Engineering team celebrated 35 years in the community. If you could use additional information about the cutting-edge, industry-leading services we offer in civil engineering, landscape architecture, structural engineering, laser scanning and land surveying, and roofing and paving consulting, please don’t hesitate to visit us online or reach out.