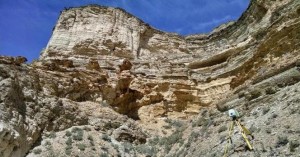 At McNeil Engineering, we’ve been using LIDAR laser scanning as a tool for civil engineering, structural engineering, surveying and building modeling for years. One of the most interesting uses was scanning the Book Cliffs in eastern Utah in a project to research how laser scanning can help find mineral deposits that could indicate the presence of oil shale deposits. It could lead to a breakthrough in prospecting for energy resources.

The ground to scan

The Book Cliffs are mountainous formations located in eastern Utah and western Colorado, so named because of the top cap on south-facing buttes, made of Cretaceous-era sandstone, which resemble a shelf of books.

The Book Cliffs begin where the Colorado River leaves the De Beque Canyon into the Grand Valley. The cliffs run mostly along the southern and western edge of the Tavaputs Plateau.

They are one of the best places in the world for studying sequence stratigraphy, which is the study of layers of sedimentary rock deposits and the way they represent various geologic processes over long periods of time.

The Book Cliffs show that the area was at one time part of the Western Interior Seaway that extended from the present Gulf of Mexico to the Yukon Territory, from 145 to 66 million years ago. Later, during the Eocene Era of 55 to 33 million years ago, the Green River Basin enjoyed warm temperatures and abundant rainfall.

In 2005, the oil shale was discovered in the Green River Formation, now estimated to contain from 500 billion to 1.1 trillion barrels of potentially recoverable oil.

Certain minerals, called mineral lenses, are often indicators of the presence of oil shale deposits, and thus pointers to valuable extractable energy resources. So a fast, cheap and non-damaging method of finding them would be a major benefit to the energy industry. At the same time, avoiding digging or drilling that does not find extractable resources would be a boon for the natural environment.

Professor Paul Jewell of the University of Utah’s Department of Geology and Geophysics specializes in studying hydrologic principles — that is, how water moves over surfaces — to understanding geochemistry and sedimentation. He has used LIDAR and other mapping technologies to create sophisticated models of surface environments in the western United States, such as Lake Bonneville, the ancient lake that covered much of present-day Utah, Idaho and Nevada after the last ice age.

One question he wanted to answer was: Can LIDAR scanning be used to find the minerals in the exposed cliff faces?

We at McNeil Engineering were happy to team up, and extend our knowledge and expertise in using LIDAR scanning and digital mapping.

LIDAR, or light detection and ranging, is also known as 3D laser scanning. It’s a combination of the concepts of laser scanning and radar.

The technology reflects a beam of laser light off a surface. Computers measure the difference in return times and wavelengths to produce a three-dimensional model of a surface.

Our laser surveying systems capture millions of measurements in a few minutes, resulting in highly detailed, rich models that we can study. They’re far more precise than the models produced by traditional surveying methods.

Over the years, prospectors have found a number of key indicators for the presence of buried resources, including oil and other fossil fuels. Fossil fuels are found in sedimentary rock. These are formed by small mineral particles deposited by running water. Over time, with pressure, they fuse together. These rocks are porous, and the spaces are filled with carbon-based, organic matter which, over time, decays into oil or gas.

Running water, such as the Green River, deposits a range of materials when it flows into a larger, more still body such as a lake. The presence of certain minerals in layers of sedimentary rock could indicate an ancient body of water, and hit at the possibility of oil or oil shale trapped in the layers.

Not to be confused with shale oil (oil produced by fracking), oil shale is a fine-grained sedimentary rock that can contain significant amounts of organic material called kerogen. When heated to high temperatures, kerogen can be converted into usable oil.

McNeil Engineering’s 3D laser scanning team accompanies Professor Jewell to the Book Cliffs. We used our laser scanning system to record literally millions of data points along the faces of the cliffs, then build digital models.

The models we generated allowed the team, as well as specialists from the University of Utah, to identify places where the mineral markers could indicate the presence of oil shale buried within the rock structures.

This information allows the geological team to narrow down the most likely places to investigate for resources.

McNeil Engineering is always ready to explore the frontiers of our field, always willing to apply our skills and the latest technology to find better ways of doing things. Read more about our applications of science and creative engineering.