Sculptors have engineering challenges, too 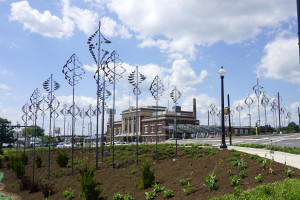 Every civil engineering project shares one common element: the environment. Every structure has to fit into its surroundings, whether they’re natural or built.

Structural engineering is all about how the physical laws of the universe affect the things we build. It’s up to civil engineering professionals to make sure that the structures we build can withstand everything the environment throws at them.

Engineering that catches the wind

A long-time client, Whitaker Studios of Utah creates beautiful metal wind sculptures that rotate, capturing the eye and the imagination. Created and built by Lyman Whitaker, with the assistance of his brother John and wife, Stacy, the pieces are sold in art galleries throughout the United States. They have also been installed in private spaces across the country. More and more, the sculptures are being acquired and installed in public spaces such as parks, train stations and roadway medians. These installations started to pose interesting structural engineering challenges.

The Whitakers came to McNeil Engineering to determine what wind speed they were capable of handling without falling over or otherwise failing. As a structural engineering challenge, the project went to Senior Structural Engineer Anthony Schmid.

“Initially it was just so he had some kind of idea of what loading the support poles could take,” Anthony says. “As time went on he started selling his sculptures to municipal entities where they would place them in parks, train stations, roadway medians, etc.”

The first challenge was to determine how to analyze the sculpture. Because they rotate, some of the wind energy is dissipated.

“We decided to be conservative, and assume that the wind sculpture does not rotate — this would be the worst-case scenario if the bearings supporting the sculpture were to fail,” Anthony explains.

Next was working out the surface area of the sculpture. This was challenging because of each one’s complexity. Whitaker Studios took this on, providing the area measures needed from their drawing models of the sculptures.

The next challenge was to get the support pole to be strong enough without making is so big that it distracted from the sculpture above. “We accomplished this by varying the size of the pipe in the support pole. We started with the largest size at the bottom, and put the smallest we could get to work nearer the top.”

Most of the sculptures were installed on flat surfaces, so the footings were standard round piers. However, one was installed on a hillside in Pennsylvania, so McNeil had to customize the footings and coordinate them with the site grading plan and site utilities.

Others were installed at Disney World in Florida. Because of the high wind loads in that area, the Disney coordinator decided to design the supports such that the sculptures could be removed before or during a major wind event.

“McNeil Engineering is currently licensed in most of the western states, but when we had projects that were back East, the art galleries would have to reach out to local licensed engineers to provide a peer review of my reports,” Anthony explains. But that requirement has a bright side. “I have been able to discuss the philosophy behind the design with engineers in the eastern United States.”

The innovation and beauty of the Whitakers’ wind sculptures is getting noticed beyond U.S. borders, as well. “We have even done some design for sculpture support posts in Kuwait,” Anthony says. “We are currently working on updating the designs to the new 2018 International Building Code standards.”

Whatever structural engineering challenges you may have, you can come to McNeil Engineering. We love challenges.